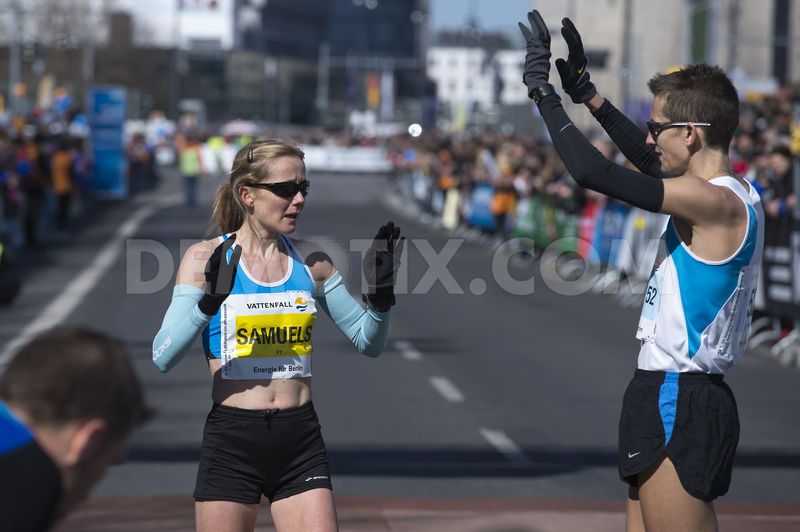 So it was back to Berlin last Sunday for a run out over the Half Marathon distance, it was here I made my debut over the distance in 2011. I was hoping to eclipse my PB set two years ago although when I landed in snowy conditions on Friday I wasn’t filled with much hope. However, the sun came out on Sunday morning and we were blessed with some “almost” spring-like weather and a PB performance I did.

The race also marked a very important re-match between Nick (the hubby) and myself over half marathon. In this very race two years ago I dropped Nick at 18k and finished a minute ahead of him. The 2011 Half Marathon Power of 10 rankings will be a one to show the grand-kids and let’s just say it has been a bit of a thorn in Nick’s side ever since. Nick likes to tell everyone he had trained hard the day before but I put it down to being better than him on the day. Although it has been great to have him help out on some of my long tempos it has also improved his endurance and it isn’t so easy to drop him these days as Sunday proved. I look forward to the day when I can wipe that smug grin off his face again, not that we our overly competitive in our house!

The first 10k was into wind and a chilly wind at that, unfortunately Nick needs to eat a few more pies before he can offer me some decent shelter but at least I had someone to chase. We went through 10k in 34.16 and I was feeling pretty strong. The support was great as was the entertainment on the side of the road. The kilometre markers were coming around fast and before I knew it I hit the last 95m. It was always going to be difficult to out sprint Nick a 1500m man but I was determined to beat other guys in our group.

The marathon in September highlighted some key weaknesses, particularly in my hamstring which can be unpredictable and hampered my training before Christmas. Since January I have been able to put some base work in and, although I feel strong, I don’t seem to have another gear right now. I feel encouraged by my performance in Berlin as it shows that things are heading in the right direction but I now aim to put some speed back into the legs. I’m still working hard on the strength and conditioning which will hopefully allow me to now do more quality work heading into the track season. .I can’t wait to get stuck in and “back on track”!