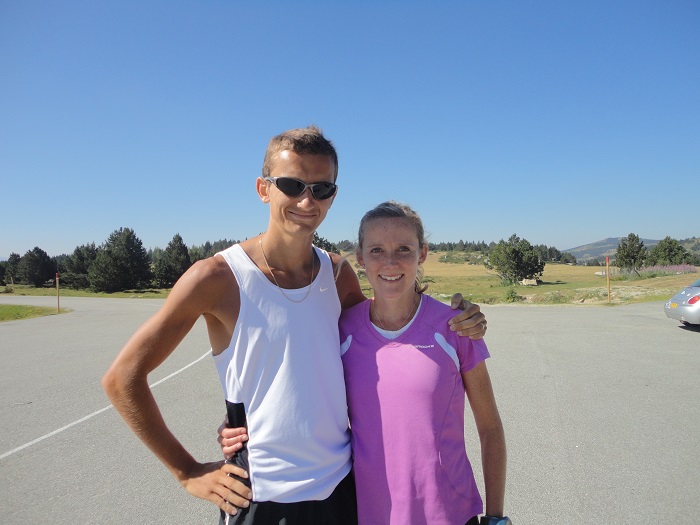 After an enjoyable debut in London in April I decided I wanted to target an Autumn Marathon. The Berlin Marathon would be my new goal. I started with my ‘what went well’ and ‘what to improve’ list from my previous build up and from there my coach and I put the programme together to get me to Berlin. I try not to leave any stone unturned and I am always open to trying new things.

I decided that throughout this build-up I would include some lower leg strength and conditioning sessions to ensure my legs were as strong as possible for the pounding on the roads. I hit the gym at least twice a week sometimes 3 depending on how tired my legs were. I always try to remain flexible and read the signs when my body needs more rest. A day off running or adapting the workouts can make the difference and avoid overtraining or injury. Easier said than done!

At the beginning of July I headed out to the sunny peaks of Font Romeu. I spent 4 weeks at altitude to gain some base fitness and get the legs conditioned to running some miles without the specific tempos and speed work sessions. Firstly, I wanted to escape the wet summer in the UK but it is also very easy to get myself into a focused mind set in this sort of environment. It is all about eating, sleeping, running and reading. I recommend reading books by Charlie Spedding and Ryan Hall, they are brilliant for inspiration!

I have used Font Romeu to prepare for races before but this time round I was finding the running a little more difficult having not ran much before I arrived. Maybe it is all in the mind but I have great belief that training at altitude and the right training programme will make me stronger and fitter. By the end of the 4 weeks breathing in the skinny air I was feeling fitter. With the base phase complete and some fitness there I headed back to Loughborough for the specific workouts.

Nick finished his track season early and became my training partner for the last 6 weeks of the build-up, it was great to have him pushing me although as you can imagine there were some heated arguments on and off the track! My first tempo went well although nothing that suggested I would run a fast time. I had good and bad days like we all do. When I had a bad day I tried to keep a perspective on things, each workout is one step in the process towards my goal. I was ticking the boxes and waiting for everything to click into place. Three weeks out I did my final long tempo run of 25k and got the confidence boast I needed. I was running 5 seconds per mile quicker than 2 weeks before. I was so excited for Berlin. Everything was finally coming together.

That was until I started suffering from a ‘dodgy’ left leg. At first the pain wasn’t too bad and would come on during a tempo run towards the end. My mind wanted to run faster but my leg didn’t want to. I tried mixing cross training with running but the pain was getting worse. Apparently sciatica is a common complaint amongst marathon runners. As I started my taper period I was limited to once a day running and running at tempo pace was out of the question. I decided to have an epidural to get me through the race. I needed to feel as comfortable as possible going into the race although I wasn’t going to be pain free.

It was touch and go whether to pull out of Berlin but when you train for 3 months you want to get out and race. It was not an option. I knew my preparation up until the taper had gone well, the work was done. It was time to test the mettle.