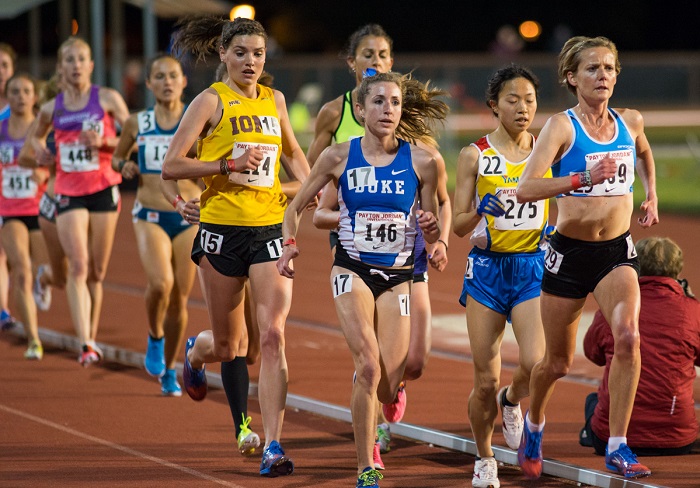 Since my last blog, there has been a lot going on. At the beginning of April I headed to California for the Stanford Invitation Track meeting. It was early to be racing on the track but I wanted to use the race as a marker of how training was progressing and to get a feel for the track. I was racing over 5000m, a rehearsal for the Payton Jordan Meeting in four weeks where I would race over 10,000m.

The race went well posting my second fastest ever 5000m time but it wasn’t without hiccups. Since moving up to the marathon distance I don’t find much need for spikes these days so I was a little out of practice and forgot to put the spikes in the shoe and realised very late on. I blamed it on the long haul flight and feeling very tired! The race also felt like  a sprint the whole way with me trying to hang onto the back.

The next day I headed to the East coast, Boston, where I would base myself for the next month before returning to Stanford. It was evident that Boston had suffered a very harsh winter in contrast to the UK where spring was in bloom, Boston was very brown and little sign of spring. Although the weather was still a little on the cold side the people of Boston more than made up for it come Boston Marathon weekend.

With the downtown area decked with blue and gold ribbons and daffodils this year’s Marathon marked the year anniversary of the bombings. It was not only an honour to witness the strength and solidarity of the people of Boston but also to be part of the celebrations of this incredible event. It was even more special that the men’s race was won by an American, Meb Keflezighi.

Meb proved his longevity in American distance running with his fourth place finish in the Olympic marathon in London 2012. It came eight years after his Olympic silver medal in 2004. He has become a premier international name in American distance running. In addition to the records and Olympic medal, Keflezighi made history in 2009 by winning the ING New York City Marathon in 2:09:15. Therefore, his Boston performance in a new personal best time further highlights what a remarkable competitor Meb is and inspires me to always strive to do my best. We can all take something from Meb’s example. His book ‘Run to Overcome’ is a gripping account of overcoming the odds.

After 4 weeks preparation it was back to Stanford for the Payton Jordan Meet where I had the fantastic opportunity to compete in one of the world’s best 10,000m races. The Stanford races are renowned for the good conditions and quality field of participants. It proved to be an amazing experience where I set another personal best time and achieved the Commonwealth and European standard. Better known as a marathoner I set myself the  goal of achieving the standard over 10,000m because I failed to do this four years ago.

There is nothing better than setting yourself a challenge, which at times seems out of reach.

Nothing is impossible.. or should I say anything is possible?