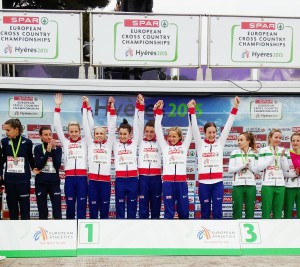 2015 has been a great year for me and those supporting and coaching me. I started out with becoming British Champion at the London Marathon in April and followed that up with a big PB in Berlin Marathon in September. Then finally finishing the year by representing Great Britain & NI in the European XC Championships.

Cross Country has always been a favourite of mine and where my first international success came as a junior. These days I see it as a fun way to enjoy competing without the pressures of marathon day. It was great to feel part of the team that was pretty familiar with most of us competing together as a team 12 months ago in Samokov. I even had the same roomie for the weekend making bathroom sharing all the more comfortable!

I finished a surprising 6th place at the Euro XC Trial in Liverpool to book my place on the team for the Euro Champs. When I say surprising it is not because I didn’t believe I could do it, more that the odds were stacked against me. After taking a break from running in October, November was a bumpy ride with niggles, sniffles and some days a clear lack of motivation to train. I had raced hard and trained hard up to Berlin marathon and my brain just wasn’t switched on to racing or running for that matter. I just had to wait it out and have fun. I joined other groups for runs, ran to time instead of distance and basically took the pressure on myself to make the team at the trials. It is just what I needed to get myself on track again.

As athletes we take it for granted when things are going well, we knock out the workouts and build up the miles but sometimes it can be quite the opposite when we are struggling to find form. I think the main thing I’ve taken from this is the importance of self-belief. All that matters is that you believe.